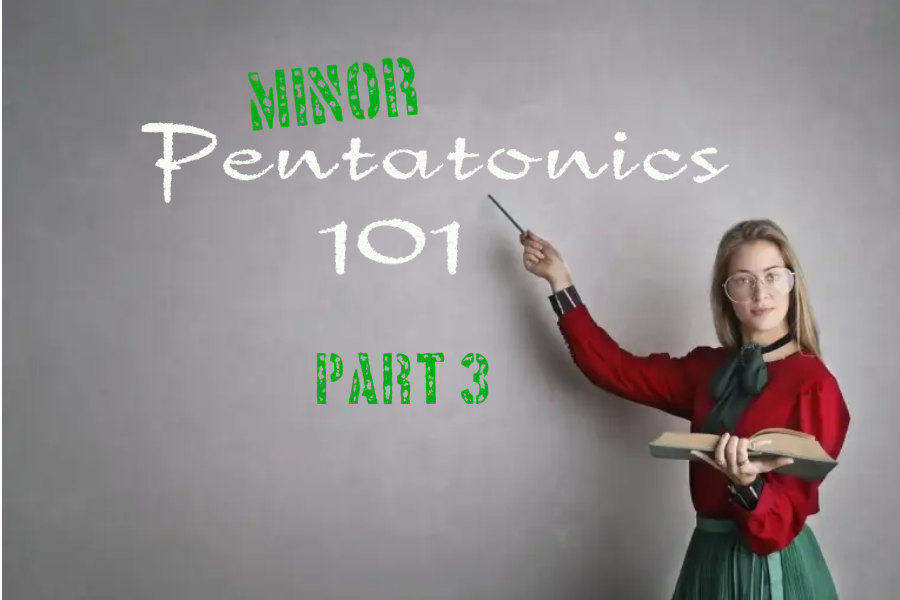 So far, we have explored the first and second forms of the minor pentatonic scale, learned a few patterns and exercises, and explored some of the theory behind the scales.

Now, in Part 3 of Guitar Goblin’s five-part series on the minor pentatonic scale, we will explore the third form.

Remember from Part 2, that the minor pentatonic scale, and actually all scales, can be played many different ways on the guitar. All we do to build the different “Forms” or patterns of the scale is change the starting pitch of the scale as we move horizontally up the fretboard.

(If you haven’t learned Pattern One of the Minor Pentatonic Scale, I suggest checking out the first article in this series.)

How to Build the Third Form

Following this logic, where do you think the third form will begin? And how will it be spelled?

If you guessed that the Third Form will start with A on the fifth fret of the low E string, then you guessed correctly! The third form will be spelled A – B – D – E – G – A. Remember, even though each of the different forms has a unique spelling, they are all part of the E minor pentatonic scale.

The third form of the E minor pentatonic scale looks like this, starting from A on the fifth fret of the low E string:

As discussed in previous lessons, the interval pattern of the First Form of the Minor Pentatonic Scale is the:

Based on this information, what do you think the interval pattern of the Third Form is?

Since we are starting from the third note of the scale, we will also start from the third interval. This means that the interval pattern of the Third Form is:

Editor’s Note: If this section is confusing, don’t worry. It probably should be. We’ll discuss intervals in an upcoming article.

Where is the Root?

The above diagram will show an E in two different places inside this form: on the seventh fret of the A-string and on the fifth fret of the B string.

Now, let’s dive into some strategies you can use to practice the Third Form of the minor pentatonic scale. Every new pattern and shape you engrave into your subconscious will slowly make you a better player.

The muscle memory will just develop naturally through repetition. Then, you won’t even have to think about it. Your fingers will just instinctively know where to go. Kind of like when you learned to write, type or catch a ball. It took repetition.

In each part of this five-part series, we have been learning a new practice pattern that we can apply to all the forms of the scale. In Part 3, we will learn our first alternate string pattern. You’ll likely find this one a little bit tricky, but once you have it, you’ll be that much more nimble on the fretboard.

Don’t feel the need, though, to overwhelm yourself with this explanation. Just make sure to memorize and practice the pattern.

You could literally pull off an entire guitar solo using just the 1st Form of the Minor Pentatonic scale. And, you’re going to see a lot of amateur guitarists doing just that.

But, the magic is going to start to happen when you’re able to link all the patterns together across the fretboard. So, we need to make sure we spend time linking these 3 forms of the minor pentatonic scale together! This is perhaps the most important part of your practice.

Here is a visual reference of the first three forms on the fretboard. You’ll notice that the scale will begin repeating itself with Form 1 at the 12th fret:

You can practice linking the scales together in many ways. At this point, you can build the scale horizontally up to four notes. Try practicing each string on its own. Being creative inside constraints is one of the best ways to build your expressive skills!

You can also practice moving through the forms on adjacent strings like this:

Or you can practice in the opposite order like this:

Get creative here. The more ways you can link these three forms together, the more musical you will become with them. Imagination is key. As you run through these exercises your fingers will start instinctively knowing where the notes are in relation to each other.

In Part 3 of Guitar Goblin’s Five-part Series on The Minor Pentatonic Scale, we learned how to build the Third Form of the scale. Remember that the Third Form starts from the third note of the scale (which was established with Form 1).

Be sure to pay attention to how we identify the root of the scale. It becomes increasingly important as we start moving through different keys. This understanding will allow you to play in all keys.

Have fun and see you for Part 4 where we dive into the fourth form. Happy practicing!