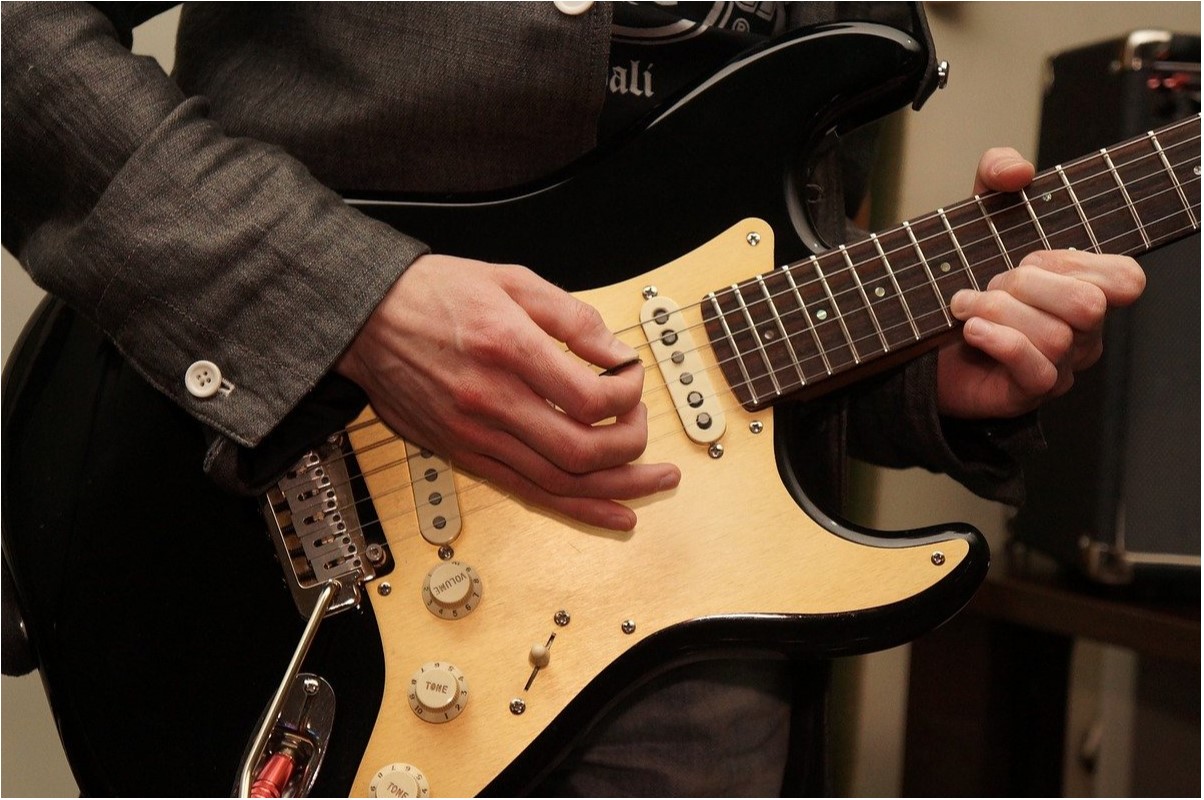 The pentatonic scale is one of the great universals of rock and roll music. A less experienced guitar player, however, might wonder why they need it and how it applies. For this reason, we’re going to cover some of the most famous pentatonic scale songs that you’re sure to be familiar with.

We’ll look at specific examples within popular song parts which will give you a better understanding of how each guitarist used the pentatonics to create greatness.

Also, check out these examples of songs that use 1-4-5 chord progressions…

Scales are groups of notes that provide a framework for playing in a certain key. They span the entire fretboard of the guitar but are usually broken up into smaller sections for memorization and practice purposes. There are many different types of scales in each key, which will each provide a different feel or flavor to a melody.

While that may seem daunting, you can easily start with a few scales which are used most often. This will surprisingly cover a whole lot of ground. Most guitarists start with the Minor Pentatonic scale.

What Is The Pentatonic Scale?

The Pentatonic scale is a scale with five notes (penta = Greek for “five”). So, while a typical scale (also called a “diatonic” scale) includes 7 notes, the pentatonics simplify this a bit by removing 2 of those notes.

The pentatonic scale is where many guitarists start when learning to improvise solos and riffs because it is so flexible. As you will see in the songs below, five notes is still plenty to create a great song.

For an in-depth lesson on the Minor Pentatonic Scale, you should check out our 5-part series here.

If you’d like to go in depth with the pentatonic scale, soloing, and just learning to master the fretboard in general, I highly recommend trying out Guitar Tricks (found here). They have a 14-Day Free Trial that gives you access to tons of great lessons and practice tools to accelerate your guitar playing.

The minor pentatonic scale is the most used scale in pop, blues and rock – period. It allows you to display an attitude that’s just hard to match with most other scales. And its simplicity makes it perfectly suited for even amateur rock guitarists to play all up and down the fretboard like nobody’s business.

So, the way I see it, Are You Gonna Go My Way is in the key of E Major, but Lenny is playing a lot of E Minor Pentatonic over it (you can play a minor scale over a major key).

This song has a fantastic opening riff that continues throughout. Take that and combine it with the high-energy solo, switching to E Major Pentatonic, and you’ve got a real beast on your hands. This is one of those songs where every guitarist should at least know how to bang out the Intro.

Stairway To Heaven is quite possibly the most famous minor pentatonic guitar solo ever. Led Zeppelin’s Jimmy Page was the master of the pentatonic scale and you’ll find that to hold true through

ut all of their records. This example is using A Minor Pentatonic.

If you’re looking for the textbook pentatonic scale example, this is a solo you should have under your belt. At some point, you’ll probably notice how other famous guitarists have been influenced by this solo if you keep your eyes peeled.

3. “Bombtrack” – Rage Against the Machine

Bombtrack is a rebel classic. As straightforward as it is, RATM guitarist Tom Morello absolutely destroys the E minor pentatonic scale in this Intro. The bass guitar mirrors Morello as they slowly build up to an explosive transition into the main riff.

If you were around in the early ’90s, you remember this song. If not, you better YouTube it ASAP.

Sunshine of Your Love is another classic that everyone recognizes. If you’ve never heard it… well you’re just wrong. You’ve heard it.

5. “All Along the Watchtower” – Jimi Hendrix

Jimi Hendrix really enjoyed covering Bob Dylan songs. There are none that can top his version of All Along the Watchtower, though. includes a ripping solo based on the C minor pentatonic scale (appearing as C# minor on the fretboard, but his guitar is tuned down a 1/2 step. In the above notes, we’re going to refer to it as C# minor to keep things simple. Just remember to tune your guitar down if you play with the track).

Above you’ll see the lead section to this iconic Intro. Again, one of the most famous and recognizable guitar riffs of all time.

Of course you’ve heard Can’t Stop by the Red Hot Chili Peppers! The explosive main riff of this song played by John Frusciante is based on the E minor pentatonic scale, giving it that classic Chili Peppers funk/rock sound.

One thing is for sure, this jam is as “in-your-face” as it can get. Make sure you wear your guitar a little low and for God’s Sake, at least put a sock on already!

Don’t Cry is a great solo that seems to be somewhat influenced by the Stairway To Heaven Solo. After all, we do know that one of Slash’s guitar heroes was Jimmy Page. He has also said publicly that his playing was impacted greatly by both Page and Joe Perry.

The solo is using the A minor Pentatonic shapes (technically G# when you tune down 1/2 step to match the record). After starting in Position 1 (which is partially demonstrated above), he then backs into to Position 5, and walks up the fretboard to transition from Position 3 (10th fret) quickly into Position 4 (12th fret) where he gracefully tears it up.

You really couldn’t ask for a better pentatonic scale example as a beginning guitarist.

All that being said, as you will see in the riff examples, the major pentatonic scale can achieve a wide range of sounds. Let’s take a look at some of the most famous major pentatonic songs that you’re sure to recognize.

In Blue Sky, Duane Allman shows us exactly how upbeat and happy the E major pentatonic scale can sound. The intro, the main solo, and nearly all of the little fill-in licks during the verse are great examples. Take a look at the snippet above showcasing the first few bars in the Intro.

For simplicity, we’re going to take a look at the bridge though, which is equally as memorable. We’ll also have to talk about why this can be a more complicated example.*

*Another Way To Look At It

There is actually quite a bit of argument over which key they’re using and which scales they are utilizing in Sweet Home Alabama. A lot of guitarists will say it’s in the key of D Mixolydian. Legend has it that there was even debate on this within Lynyrd Skynyrd. Both can be right, it kind of depends on how you look at it.

D Mixolydian is actually the 5th degree in G Major and for the purpose of this conversation, it’s the same as the G Major Scale. I have another way to look at this riff, though, which is a more helpful learning experience.

It’s quite possible that the thinking behind this riff was to follow the underlying chord progression (D – C – G). Instead of staying in G Major, sometimes you can follow the chord changes. If you look at the diagrams below, you can see how that compares to the tab. The notes fit perfectly into Position 5 for D, C and G.

It’s easy to get overwhelmed by guitar scales. But when in doubt, you can keep it simple with the major or minor pentatonic scales. There are infinite possibilities even stopping there.

The pentatonic scale is a great way to understand some of the most well-known riffs and solos in rock and roll. If you can learn to recognize it, you’re halfway to learning all kinds of great songs! Have fun rocking! Seven is a great age to introduce your child to the guitar. Especially, if they’ve shown interest on their own. But, with so many options, where do you begin? For a child’s first guitar, it’s best to keep it simple. You can start by deciding whether you’re purchasing an acoustic or an electric. Next, you’ll… It’s a controversial subject among guitar snobs everywhere. Is Richlite an acceptable, quality replacement for traditional wood fretboards? Many guitarists will undoubtedly say no. Others will say that Richlite fingerboards are fantastic and that they just got a bad rap. Well, get off your high horses and meet me in the next section because, today,… So, you’ve purchased a Focusrite “Scarlett” USB audio interface and you’re ready to select your recording software. This can be a tough decision at first, as there are quite a few DAWs to choose from. In this article, we’re going to address this question along with a few others. Why Choose A Focusrite Scarlett Digital… A name has risen into the peripheral of many guitarists over the last several years. A brand name that isn’t carried in your local music store; that’s celebrated by YouTube influencers, yet sometimes scoffed at by guitar snobs. That name is Harley Benton. Buying a budget guitar can be a bit of a gamble. I,…